A Little Gift of Grace


Although not yet completely pain free my physical condition is so much better than it was that I am doing my best to make up for my inability to participate in pre-Christmas events and festivities last year.  And so, I have been going to various events around the city and just plain looking with appreciation on the decorations that are now mostly in place.


I’ve even been posting photos of what I am seeing on Facebook and have received appreciative comments from friends who no longer live in New York City or who cannot make it around to see them in person.

While the lighting of the Rockefeller Center Christmas Tree is a huge event, attended by thousands of people and televised nationwide, this is not the tree lighting that means the most to me.  Actually, there are two tree lightings that are much closer to my heart.

The first is, of course, the famous Neapolitan crèche scene and angel tree at the Metropolitan Museum of Art.  This combines a beautifully decorated tree with an even more beautiful and complex traditional Neapolitan presepio scene, donated to the museum in 1964 by Loretta Hines Howard and still watched over by her family to this day.  I have fond memories of its early days and it has accompanied all my Christmases for the last 55 years.  Each year I search eagerly among the vignettes of daily life that are recreated around the base of the tree for new figures or new settings for familiar ones.  Every year since I became a volunteer at the Met I try to fill in any vacancy at the information desk in the Medieval gallery, where it is displayed, so that I can spend the afternoon in its serene presence.

The second personally significant tree lighting is the glorious display of trees along the Park Avenue median mall.  Every single crossing of Park Avenue from 54th to 97th streets is flanked by lighted Christmas trees.  Every block has two trees, one on each side, while the important crosstown streets have three trees on each side.

This has been a steady accompaniment to my entire life.  I can still remember how they looked when I was a very small child and they have been there every Christmas throughout my life.  They are not only beautiful in themselves, but they are the conveyers of memory as well.  For they are trees of remembrance, initially of the wartime dead, but now of all those who have left us.

The trees were the idea of one woman who, in 1945, financed the installation and lighting of trees in memory of her son, who had been killed in the Second World War.  The following year she was joined by other Park Avenue families, who wished to remember their own war dead.  The families carried the burden for many years, until it was picked up, sometime in the 1960s by a non-profit group, currently known as the Fund for Park Avenue.  They continue to finance the trees at Christmas and the planting of flowers at other times of the year.

The tree lighting occurs as the conclusion of a ceremony held at the Brick Presbyterian church (at 91st Street).  In the distant past the lighting was held on an early December Friday evening.  However, for some time it has been held on the Second Sunday of Advent.  I had noted the timing of the ceremony for this year.  The ceremony began at 6:30, which led me to surmise that the lighting itself would probably be around 7:30.

Regrettably, I knew I couldn’t get to the ceremony, due to a commitment elsewhere.  As this was the first anniversary of the last Sunday before the surgery last year I wanted to go to the evening Mass at the Dominican church of Saint Vincent Ferrer, located near me. to give thanks at the shrines of Saint Martin de Porres and Our Lady of Guadalupe.  One year ago I visited their shrines to ask for guidance and protection to the surgeons, nurses and others who would be treating me.  But, as that Mass ends around 7 PM and I planned to go directly home, I expected that by the time the lighting took place I would already be home.  Ah, well.  Such is life!  However, the Lord had a kind little surprise in store for me.

My departure from Mass was delayed by several well-wishers who remembered that a year has passed since my surgery.  Of course, my reaction was one of pleasure that they had remembered and I spent some time talking to them.  I confess, I lost track of time somewhat.

My homeward route took me west across Park Avenue, heading for a bus stop on Madison Avenue.  When I reached Park I had to wait on the east side of the avenue for the traffic light to change.  As I had anticipated, the mall trees were still dark.  And, then, suddenly, they were alight!  The delay had been just long enough to place me at the right spot to witness the transformation.  What an amazing gift!

The gift was made even more special by the color of the lights this year.  All last week I had been thinking of the trees and images from my early days had risen to the surface of my mind.  I remember the trees of my childhood, not twinkling with blue-white LED light, as the trees of the last several years have, but glowing softly as they used to do in the days when the only lightbulbs available were yellowish-white incandescents.  To my surprise and delight this year the LED lights have a warm golden glow, almost like the glow in my memory. 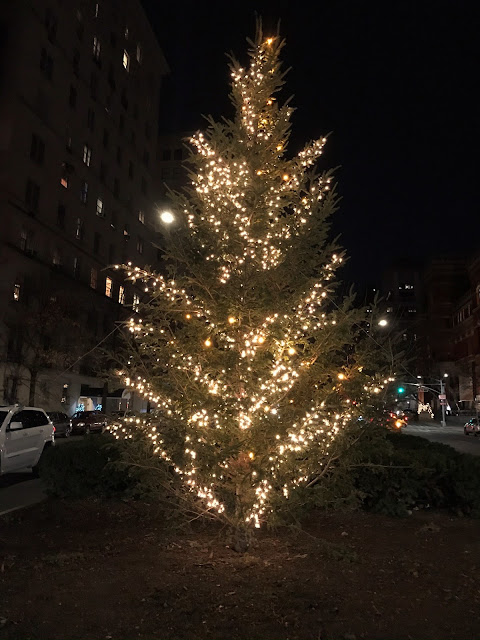 It’s a small thing certainly, in face of the many challenges which the current world situation and my advancing years and physical situation confront me with, but this small gift of light is a reminder and a pledge of the great love and mercy of God to each of us, if we will only recognize it.

May all of you have a blessed Advent and a truly happy Christmas.

Posted by Margaret Duffy at 1:55 AM No comments: Links to this post