The Animals at the Manger 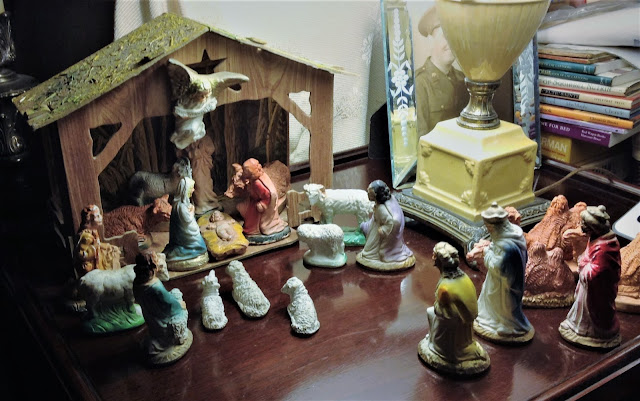 Every Christmas that I can remember I have had the same creche.  It was bought by my parents when I was a baby, assembled from inexpensive figures available at Woolworth's.  The figures are made of plaster, formed in molds, then dried and painted.

When I was very small I used to play with them, in much the same way as I played with my dolls.  But, they had a more powerful aura than my dolls did.  For one thing, they only appeared for a fairly short time each year and, for another, I knew that they represented something very special, especially the Baby, Mary, Joseph and the angels.  I wasn't too certain about the specialness of the shepherds and kings, so today I find those figures to be pretty beat up, while the figures of the Holy Family and the angels are almost pristine.  Indeed, the kings were so badly beaten up that a few years ago I scoured Ebay till I found the correct replacements.  And, to my immense surprise a number of the replacements still had the original stamping on the bottom.  That's how I discovered that this simple set of figures were made in Italy shortly after World War II.  Who knew!

Every creche, from the simplest set to the great elaborate Italian baroque presepi, such as the annual display at the Metropolitan Museum, has a pretty standard cast of characters, just as mine does.  In addition to the Holy Family and the angels there are shepherds, sheep, dogs, wise men and camels.  But among the most basic there are the two most important animals, the cow or ox and the donkey, usually referred to as the ox and the ass.  The ox or cow is, of course, the inhabitant of the stable where Mary and Joseph found refuge.  The donkey represents the beast of burden that brought them to Bethlehem from Nazareth.  And, according to my mother, who was raised on a farm, their breath helped to keep the Baby warm as He lay in the manger.

So far, so good.  However, nowhere in the New Testament descriptions of the birth of Jesus is there a single mention of these two animals (or any others, for that matter).  So, where and when did they enter the story, at least visually? In order to find out, I have embarked on a quest of sorts, searching for the earliest images of the manger scene.

Thus I can tell you that the ox and ass have appeared in every Nativity scene I have examined, going back to the fourth century!  That is the time during which Christians felt free enough to make public art, no longer confining it to the household or to the veiled symbolism so frequent in the funerary art found in the catacombs.

So, it appears that these humble domestic animals have been part of the Christmas story from the very beginning of Christian iconography.  This seems entirely appropriate as we remember that the Lord of Space and Time chose to enter human time as a baby born in a borrowed stable and put to bed in a feeding trough usually used by cows and donkeys.

Wishing to every reader the blessings of the Birth of Christ I will say Merry Christmas!