Saint Louis of France – Saint, King and Patron of the Arts

Saint Louis. To most Americans this name summons up the image of a city on the Mississippi River, known for its monument of the Gateway Arch. It most certainly does not summon up the image of a medieval French king, still less a saint of the Roman Catholic Church. ﻿﻿


Louis IX (Capet) combined in one person two kinds of people that we normally think of as incompatible, king and saint.


He was born in 1214 and became king at the age of twelve. He was king from 1226-1270 when he died in Tunis, on his second attempt to retake North Africa and the Holy Land from the Muslim Turks.

This statue, completed shortly after the death of St.Louis, is probably the closest we can come to an actual likeness of the saint/king.


During his lifetime he was known internationally as a lover of justice, a friend of the poor, very devoted to God and to the Church. His life is very well documented, both in the historical record and from the descriptions that were written down as part of the papal investigation into his life that was carried out after his death to determine his sanctity.  He was canonized in 1297. His feast day was set as August 25, the date of his death.


One of the witnesses in the papal investigation was the noble, Jean, Lord of Joinville, a companion of St. Louis on the Seventh Crusade. The memoir was subsequently published in succeeding decades.


Joinville relates a charming story of an event during the Seventh Crusade that demonstrates how Louis was viewed during his own lifetime.

“Journeying day by day we came to the sands of Acre, where the king and the host encamped. At that place came to me a great troop of people from Great Armenia, who were going on pilgrimage to Jerusalem, having paid a great tribute to the Saracens, by whom they were conducted. By an interpreter, who knew their language and ours, they besought me to show them the sainted king. I went to the king there where he sat in a pavilion, leaning against the pole of the pavilion; and he sat upon the sand, without a carpet, and without anything else under him. I said to him: "Sire, there is here outside a great troop of people from Great Armenia, going to Jerusalem; and they pray me, sire, to cause the sainted king to be shown to them; but I have no desire as yet to kiss your bones." He laughed aloud, and told me to go and fetch them; and so I did. And when they had seen the king they commended him to God, and the king commended them to God likewise.”1


There is, in this story, something touching and something that rings very true. Joinville’s joke and Louis’ laughter remind me of recently dead people who were widely considered to be saintly, even before their deaths, such as Mother Teresa of Calcutta and Pope John Paul II. Like them, St. Louis was aware of his own faults and amused by the idea that others found him saintly.

However, the subject of this blog is not sanctity, per se, but art. And, in that realm, Louis was one of the greatest patrons of art in the 13th century. His record of building is extensive, but one building in particular stands out. This is the Sainte Chapelle in Paris.

Built between 1239 and 1248 and originally part of the royal palace complex on the Ile-de-la-Cite, the Sainte Chapelle was designed as a precious container for the extremely precious relics that Louis had purchased from the Latin Emperor of Constantinople and acquired from other sources. These included a fragment of the True Cross found by Saint Helena, the Crown of Thorns, a nail from the Crucifixion and other relics related to the Passion of Christ.

The chapel, which has often been compared to a reliquary, is famous for its precious stained glass windows, and is one of the finest and most influential buildings of the High Gothic style known as Rayonnant.


Although the building was seriously damaged during the French Revolution, the jewel-like 13th-century stained glass windows are almost entirely intact, surprisingly thanks to that same Revolution. Apparently, following the Revolution, the relics were removed from the Chapel and their reliquaries sold off. (The relics were, however, preserved and, rehoused in new reliquaries, are now currently kept in Notre-Dame Cathedral where they can be venerated at special times.)

The Chapel was used as an office and high cabinets were placed against the windows. After the revolutionary period ended the Chapel was restored under the direction of the famous (and sometimes infamous) antiquarian Viollet-le-Duc.

The Sainte Chapelle now stands alone.  The palace of which it once formed a part was destroyed in later centuries, sometimes by fire, sometimes by deliberate destruction.  It now stands in the midst of the Palais de Justice, whose buildings date primarily from the Second Empire period of the mid-19th century.

The building is small and has two stories.

The under story, which opened to the ground level, was used as a parish church by the palace staff. It has mostly solid walls, with only small window openings.


The upper story had an entrance for the king directly from the palace. Here there are virtually no walls but the glass itself. The stone elements appear to be minimal.

The tall, narrow windows are composed of figured roundels, ovals, diamonds and other geometric shapes with stories from the Old and New Testament, especially stories related to kingship. The spaces between the roundels are filled with patterned decorations. 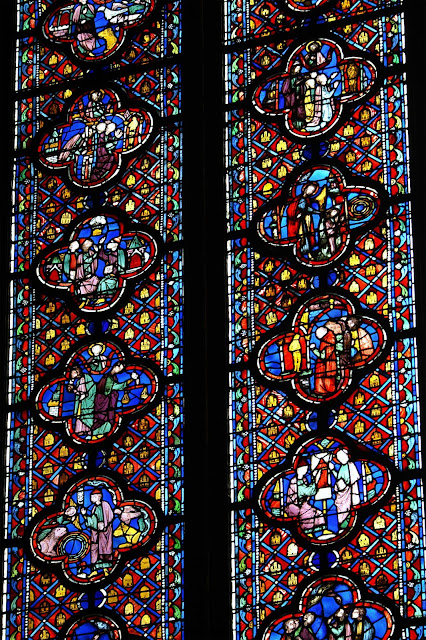 The Pierpont Morgan Library in New York holds a famous manuscript, the Morgan Picture Bible, that is believed to have been painted for Louis.


Other libraries also have manuscripts that are associated with Louis, such as the Psalter held at the Bibliothéque nationale de France.

After his death and canonization Saint Louis became one of the patron saints of France and aspects of his life were frequently shown in historical books and books of royal administration.

He was also featured as a saint among other saints in decorative projects, as for example, at Assisi and elsewhere.


And he was especially honored by his own descendants, the Royal Families of France and Spain. He appeared in paintings that present him as saint, as king and as family patron.


This continued right up to the very eve of the French Revolution.

During the period of the French Revolution and Napoleonic Empire (1789-1815) such images were, for obvious reasons, no longer produced. ﻿

However, with the restoration of the Bourbon Monarchy in 1815 St. Louis rapidly made his reappearance in French painting.

A spike in paintings of the life of Saint Louis appears to have taken place around the 550th anniversary of his death, in 1820.

However, this time there was a difference in the subject matter. Instead of iconographic scenes depicting Louis as a Christian saint, the images were drawn from historic episodes from his life. This was in keeping with both the new secularism of the French state and with the historicizing mood typical of the Romantic period.

Many of these images appear to have been commissioned for the redecoration of the royal palaces at Versailles and at Fontainebleau and patronage appears to have continued under Louis-Philippe, from a branch of the royal stock, who came to the throne as a constitutional monarch after the upheavals of 1830-1831.

While the names of most of the painters who contributed the majority of these pictures are unknown to all but specialists today, two of the greatest names in 19th century French painting also contributed their interpretations of St. Louis and his life.


Images of St. Louis as saint, king and patron of France continued to be produced all through the remainder of the nineteenth century.

In 1874 the painter Alexandre Cabanel received the commission to paint part of the decorative cycle of the history of France in the Pantheon, the former church of Saint Genevieve, converted during the Revolution to a monument to French notables.  His subject was the life of Saint Louis, representing the Capetian dynasty.

In 1880 Charles Lameire contributed the design of a mosaic featuring Saint Louis and his predecessor, Charlemagne (who is sometimes given the dignity of sainthood), to the construction of the new basilica of Notre-Dame de Fourviere in Lyon, which began in 1872 and was completed in 1896.


Images continued to be made into the twentieth century, as well.

Illustrating Miracles: The Hole in the Roof

The Holy Name of Jesus