Why Christian Art Is Lame, #2

Much Christian art is often nothing better than sentimental eye candy. Alongside the problem of bodily distortions and eventual disappearance, is the problem of images that, while readable, have become trivialized and pedestrian. In other words, much of the “Christian art” of the last 150 years or so has been diluted by a spirit of sentimentality and wish not to give offense.

This trend can begin to be seen in some of the art of the first half of the 19th century, especially in the work of the German Nazarenes and the English Pre-Raphaelites. A popular image from the very beginning of this strain is William Holman Hunt’s “Light of the World” (Manchester, City Galleries). Painted in 1851-52, this work illustrates the passage from Revelation that reads:

Behold, I stand at the door and knock. If anyone hears my voice and opens the door, I will enter his house and dine with him, and he with me. (Revelation, 3:20)

While Holman Hunt’s image still retains some of the mystery and awe that had attended images of Christ from the earliest times, it also stands at the beginning of a series of images that progressively sentimentalized, trivialized and domesticated Christ and His presence. We all know the results of this process. We have lived with it all our lives, from the “gentle J 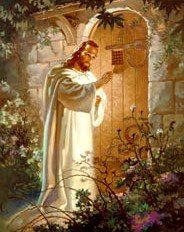 esus, meek and mild” image of countless Good Shepherd pictures, to the works of Warner Sallman (such as "Christ At the Heart's Door", located at Anderson University, Anderson, IN, which clearly derives from Holman Hunt's picture) to innumerable devotional images of the Sacred Heart. In contrast to the portrayals of Christ in earlier art, where Christ is presented as a solid personality, in this strain of art Jesus is presented, as almost hollow, somehow lacking in personality and uniformly pretty. There is no blood, no confrontation, nothing that can offend the most delicate sensibility in its audience.

Add to this abstraction of personality the later strain of visual abstraction and one finds that recent Christian art no longer has much contact with a concrete reality, with the Incarnation in fact. It can be difficult to see in the late-19th and earlier-20th-century mild mannered Jesus or in the late-20th-century abstract Christ any relation to a living person, who is also God. The balance between the man and the Godhead has vanished into a dreamlike state of unreality. This Jesus is shown as already living in eternity, where no human emotion exists and, therefore, lacking in anything that might engage our own emotions. This may, perhaps, partially account for the impact felt by many from Mel Gibson’s “Passion of the Christ” which reinserted a strong dose of reality and emotion into what had become an almost dreamlike atmosphere of unreality. Whether this jolt will affect other visual Christian works remains to be seen.
Posted by Margaret Duffy at 2:49 PM