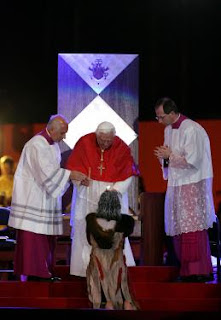 Like many other people I’ve been watching the World Youth Day celebrations in Sydney. It’s been mighty impressive to see so many young people from all over the world enthusiastically participating in religious activities. Combined with my own experiences during Pope Benedict’s visit to New York in April, it makes me ponder…..

When I was a young child there were many occasions for a young person to be part of diocesan-wide activities. My parents brought me, year after year, to a Rosary event that took place at the Polo Grounds (the home of the old New York baseball Giants team). Then there was the time that I was chosen to represent my school at a Mission Sunday event at St. Patrick’s Cathedral. Along with a classmate, I was dressed as a miniature Daughter of Charity and joined hundreds of other children (boys and girls) attired as members of other religious orders. Not surprisingly our headgear attracted so 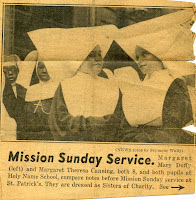 much attention that our photo appeared next day in the pages of two New York newspapers! My father kept one of those pictures folded up in his wallet for years and years. I found it there after his death.

But in my later teen years and ever since, such big church events have been pretty hard to come by. The stadiums became the venues for rock concerts and the cathedral was a place to which one seldom went. In fact, it’s sometimes been difficult to see oneself as part of anything bigger than the attendance of the Mass I go to, or maybe the parish gathered for some special event. That’s why events like a Mass at a Yankee Stadium or a Central Park are great. One suddenly sees oneself as a member of something very large, a worldwide group of believers in the Gospel, in the traditions of the Catholic Church as the carrier of the Gospel, and, as the Body of Christ, congregated around His Eucharistic Body. Sometimes we need that kind of experience of being together as Catholics. Indeed, the character of the Catholic faith may positively require it.

How I wish there had been a World Youth Day when I was in my teens, twenties and thirties! (The first one happened near the end of my thirties and I was barely aware of it.) Events like it might have saved many of my cohort from loss of faith, from discouragement and drifting away. I pray that the young people who went to Sydney will be profoundly affected for their entire lives. Even if only 10% of those who go to each WYD remain permanently affected, what a blessing for the church!
Posted by Margaret Duffy at 12:18 AM