Lent in Rome: The Station Churches 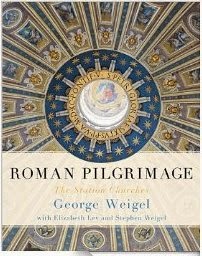 A few days ago one of the priests in my parish brought my attention to a relatively new book on the subject of the station churches of Rome. It is called Roman Pilgrimage: The Station Churches and is written by theologian and biographer George Weigel, in collaboration with art historian Elizabeth Lev, with photographs by Weigel’s son, Stephen.


The title reminds us of an ancient practice in Rome, recently revived. In the early and medieval Roman church, the practice developed of a pilgrimage from an assembly church to the station church on each day during Lent. During the move from the church of assembly to the designated church of the day people would pray the litany of the saints. Mass at the station church for the day would be offered as the high point of the pilgrimage.


The practice fell out of use during the period of the Avignon papacy in the fourteenth century. This is the period in which the papacy was hijacked by the French monarchy and was based in Avignon in southern France. Through the hard work of saints such as Catherine of Siena and others Pope Gregory XI returned to Rome in 1377. However, the practice did not resume with this return, although the stations themselves were remembered in the Roman Missal, each day in Lent bearing the notation of the church that had been the station for that particular day.


It was not until the middle years of the 20th century that interest in resuming this ancient practice revived. According to Weigel, in 1959 Pope John XXIII came to the first station church, Santa Sabina on the Aventine hill, to receive ashes on Ash Wednesday. But this action does not appear to have been repeated consistently until the pontificate of Blessed Pope John Paul II and has been continued by his successors. (Below is footage of the event with Pope Francis).

It is also, according to Weigel, a project which has been spurred into revival primarily through the efforts of English speakers, notably the priests and seminarians of the Pontifical North American College of Rome.

The book is a guide through Lent as well as through the station churches. Weigel’s daily essays focus on reflections based on the readings for each day of Lent. Lev’s short essays focus on elements of the churches and their decoration and are fairly short. Many, though by no means all, of the churches have occasionally featured in this blog (and offer another suggestion for discovery on it). Photographs are primarily in black and white, though there are three short sections of color photographs. This was, I’m sure, a decision that was made with the price of the book in mind. To have produced a book of color photos would have made the cost prohibitive for most individuals. In compensation, I would suggest that those who wish to view color photographs peruse the internet in addition to viewing the photos in the book. Some of the resources that can be used are listed in the Useful Links section of this blog (see tabs are the top of the page).

Among the most interesting photographs are those taken during the actual station Masses that take place each day of Lent with the participants of the pilgrimage very much in evidence. That too is a very heartening thing to view for participation requires a certain amount of sacrifice on the part of the participants, since it begins each day in pre-dawn late winter darkness.

The book is available in hardcover and also as an ebook from both Amazon and the iTunes store.  I have the hardcover edition, but one can surmise that the ebook version for color readers might be of some value if it permits you to zoom into the photographs.

Posted by Margaret Duffy at 1:09 AM