Stations of the Cross: The Fourth Station, Jesus Meets His Mother

All of the Gospels tell us that there was a devoted group of women who witnessed the death of Jesus, following Him throughout the progress toward Golgotha and watching “from a distance”.1  Only the Gospel of John includes His own mother, the Virgin Mary, among the list of named women.2  But it is surely conceivable that she was there, witnessing what she may have believed was the finale of the drama that had begun for her with the visit of an angel and living out the prediction of old Simeon that “you yourself a sword will pierce” (Luke 2:35).

Tradition suggests that Mary was indeed following Jesus closely from some point in the slow march out of town and this tradition has been envisioned in the Fourth Station of the Cross.  One of the great things about Catholicism is its ability to mingle the divine and the human without sacrificing the integrity of either and it does so in this moment, in this image, as well.  We see here the suffering Son and the sorrowing mother, two very human beings.  Who among us has not had a moment where we and a doomed love one confront each other in the knowledge of what lies ahead for both?  But one of these two is also divine and knows the deep purpose toward which His suffering is directed.  The emotion is deep, but different for both. And it is also this deep reach into the emotions that is a further strength of the Catholic imagination.  In the end, the Stations of the Cross are ultimately a mode of prayer that involves both human reason and human emotion and raises them to the contemplation of divine Love.

Conveying this deep emotion in a visual expression has been the job of the artists who have imagined this scene throughout history.

It begins with a specific turn of the body of Jesus, a spiral that interrupts His forward momentum briefly as He turns back to look at Mary, who follows with gestures of prayerful support.

Around 1500, however, the drama increases.  Mary begins to act more dramatically.
She kneels, she faints, she throws herself violently toward Jesus.  And Jesus is now shown in a more dramatic posture as well.  No longer is he usually shown plodding on as before.

Now He often confronts her from a fallen position, so that the swooning mother and the fallen Son remain facing on the same level.

This emotional stream seems to have reached a crescendo in the late nineteenth century. 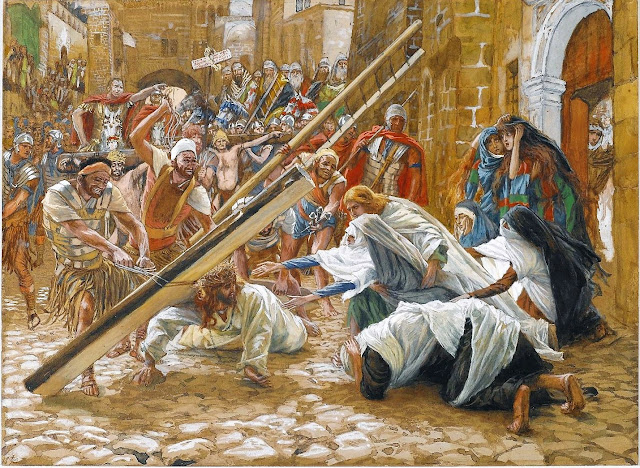 With the coming of the twentieth century and the divorce between the visible world and the mental one in art as well as in other areas of life, this trend toward extreme emotion was curtailed and made largely symbolic once again.

Scripture texts in this work are taken from the New American Bible, revised edition© 2010, 1991, 1986, 1970 Confraternity of Christian Doctrine, Washington, D.C. and are used by permission of the copyright owner. All Rights Reserved. No part of the New American Bible may be reproduced in any form without permission in writing from the copyright owner.
Posted by Margaret Duffy at 1:10 AM