One of the most common images in Christian art, both Eastern and Western are angels. Angelic choirs surround us when we worship. They appear as adoring figures in paintings of Jesus and of the Virgin Mary. In scenes of the Annunciation, Gabriel is the resplendent messenger of God.

Angels are often active as witnesses to heroic martyrdoms. Sometimes, especially in the case of Michael, they are the subject of a work of art.

Many of them are the magnificent and solemn winged beings that one would expect of the spirits that stand before the throne of God and move swiftly to do His will in the universe. Some of them have a different function. Perhaps they represent a less exalted level within the divine economy. Indeed, sometimes not all of them are, strictly speaking, angelic. Some of them may even be putti.

Putti (or the singular putto) is an Italian word more common among historians of art and architecture than among the general population, but every one knows what they are. The secular version is especially prolific around Valentine’s Day. They are those charming, cute, mischievous winged children sometimes called cherubs or cupids and they have a history much too long for their tiny wings. They are the descendants of the Greek god of love, Eros.


Originally, Eros was depicted as an attractive, but fully grown young man, fully ready and capable of being the husband of the beautiful Psyche. He was also associated with the more mature aspects of human love, those associated with commitment and mature understanding. He was recognized as a god in his own right.

However, as the centuries progressed, he grew ever younger and came more and more under the shadow of his formidable mother, the goddess of sexual love, Aphrodite. By Hellenistic times (the 4th - 2nd century B.C.), he had become a mischievous toddler, armed with the fearsome arrows of desire which he used to create havoc among mortals.

He was attended by a train of similar figures, the Erotes, symbolizing perhaps all the strange and disconcerting alterations of everyday life which are associated with the idea of “falling in love”.

The Romans, as they did with so much of Greek antiquity, adopted him into their own pantheon of gods and he became the familiar Cupid, attendant on his mother, who became the Roman goddess, Venus.

Some of his old mystery was returned to him, however, in the persons of his attendant Erotes, who became identified with the native Roman spirits, the Genii, who were attendant companions to the souls of persons and who led them to their ascent to the gods.

They were imported into Christianity under the latter aspect, so that, by the fourth century, they appear, for example, in the mosaics of the tomb of Constantia, the daughter of Constantine, in what is now the church of Sta. Costanza in Rome.
There they are shown playing among the images of grapes and wheat, which refer, of course, to the Eucharist. They also appear on some Christian sarcophagi, especially those which show similar Eucharistic references, such as grape vines.


During the Byzantine period and the Western European Dark Ages they disappear. Angels during these times come into their own as splendidly dressed, solemn and beautiful winged adults. They represent the eternal world of Heaven, calm and serene, and reflect the awesome presence of God.
As Europe recovered from the various invasions which had submerged the old Roman culture a thaw began to set in for angels too, but gradually.

Giotto’s great fresco of the Lamentation in the Arena Chapel at Padua features a group of charming small angels emoting in the sky above. They express their feelings of grief in no uncertain terms, tearing their hair, rending their garments, even screaming. 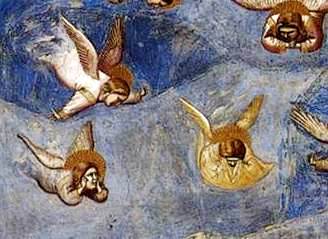 However, although they are small, there is no doubt that they are definitely angels and not putti. Their emotions, although strong, are serious and noble. Putti are never anything but playful.

By the time the softening into realism which began with Giotto had reached its zenith in the great artists of the High Renaissance, especially Raphael, putti had returned to their former position.

They appear everywhere. In the art of Raphael alone, they cavort in pagan cheerfulness in the decorations of the Vatican Loggia and appear in barely contained solemnity in religious paintings. To Raphael, indeed, we currently owe the ubiquitous image of the two little “angels” from the Sistine Madonna which currently decorate everything from stationery to umbrellas.

At almost the same time, similar beings attend the goddess Venus in the work of Titian and Veronese.

Once established in the work of such a great classical painter of the High Renaissance, the position of putti was firmly assured. They appear continually in both secular and religious painting, barely distinguishable from one another.

One need only think of Murillo’s well-known paintings of the Immaculate Conception and compare them to any mythological or amorous painting by Boucher or Fragonard, especially one involving Venus or human lovers, to see how closely the “cherubs” of the one are related to the “putti” of the other.

To both the sacred and the profane these little winged characters impart their special touch of frolic and joy.