O King of All the Nations!

Probably the most famous image of the Creation of Adam is that by Michelangelo on the ceiling of the Sistine Chapel.  Michelangelo's conception of the subject both embraces the iconographic tradition and departs from it.﻿

The most traditional element is found in Adam's reclining posture.  The departures from the tradition are found, first of all, in the dynamism of the figure of God, who zooms in from the side on a cloud, surrounded by angels, and bestows life through that dramatic synaps 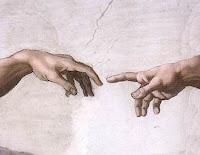 e between His extended finger and that of Adam.

And, most non-traditional of all is the figure of Eve.  She appears, tucked under God's left arm, which she clutches as she looks with curiosity (and perhaps some apprehension) toward her soon-to-be spouse.1

Earlier images were more static, depicting God, generally unaccompanied, standing over the reclining figure of Adam as He calls life into it.


Eve did not make her appearance in creation images, except for those images that shows her creation from Adam's rib.
Michelangelo also painted a far more conventional image of the creation of Eve, also on the Sistine ceiling.﻿   It is far more static and traditional than the amazingly dynamic Creation of Adam.