For December 21st, the fifth "O Antiphon" reads:  "O Radiant Dawn, splendor of eternal light, sun of justice: come, shine on those who dwell in darkness and the shadow of death".

Images of light are common metaphors for the divine and the image of the sun, especially of the sun at dawn dispelling the darkness of night, is frequently associated with Jesus.  One thinks particularly of the imagery implicit in the entry of the Paschal Candle into the darkened church at Easter Vigil, accompanied by the proclamation "Christ our Light" and the response "Thanks be to God".

This particular "O Antiphon" of Advent brings to mind a distinct image, from the earliest period of Christian art.

This early image appears in the second half of the third century (ca. 250-300) in a tomb that has been excavated down on the lowest level of St. Peter's Basilica (see my article on St. Peter's for a description of this level).  It is a mosaic on the roof of the mausoleum of a family known as the Julii (the men would have the name Julius as the second of their three names and the women would have Julia as one of their two names).

﻿At first glance the mosaic looks not very different from numerous pagan images showing the Greco-Roman sun god, Helios (sometimes identified with Apollo) driving his chariot through the heavens.  However, comparison with pagan images of Helios suggests a different meaning.

In the pagan images the head of Helios is surrounded by projecting sun rays that are evenly distributed and of one (or occasionally two) lengths.  No ray is specially singled out in any way.

However, on this tomb ceiling under St. Peter's, the rays look different.  There is an emphasis on several of them that makes them heavier and longer than the others.  This emphasis seems to create a cross pattern, similar to the later haloes with the cross that became standard for Christ.


It would, therefore, appear that the equation of Jesus with Helios, as demonstrated in this mosaic, may have resulted in the decision to attach the pagan celebration of the festival of Sol Invictus (the unconquered sun) to the Christian celebration of the birth of Jesus after the apostate Emperor Julian, grandson of Constantine, attempted to revive the pagan ethos of Rome.

It is also why the image of Christ in scenes of the Last Judgment so often show Him surrounded in a golden aura, like the sun. 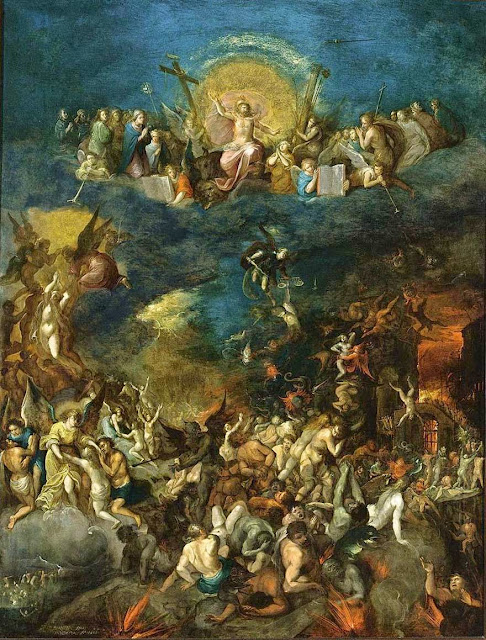 Posted by Margaret Duffy at 3:10 AM