“When it was evening,
there came a rich man from Arimathea named Joseph,
who was himself a disciple of Jesus.
He went to Pilate and asked for the body of Jesus;
then Pilate ordered it to be handed over.
Taking the body, Joseph wrapped it in clean linen
and laid it in his new tomb that he had hewn in the rock.”


Like the “Kiss of Judas”, this fresco of the “Lamentation” is among the most reproduced paintings in the world. It is also clearly one of Giotto’s greatest masterpieces, with a sureness of composition and execution that command attention.

The dead body of Jesus lies across Mary’s legs. Her right knee supports His torso; as she bends down to kiss Him. His head is supported by a woman seen only from behind. The rest of his body is also supported by women. Mary Magdalen supports his legs and feet, while another woman seen from behind supports the rest of his body and a woman seen in profile supports his hands. A larger group of women appear at the far left, expressing their grief in various ways. St. John stands above the woman seen in profile and he expresses his grief with hands widely spread. To the right stand two male onlookers, probably identifiable as Joseph of Arimathea, who donated the tomb and who is mentioned in all four Gospels, and Nicodemus, who is mentioned in the Gospel of John. 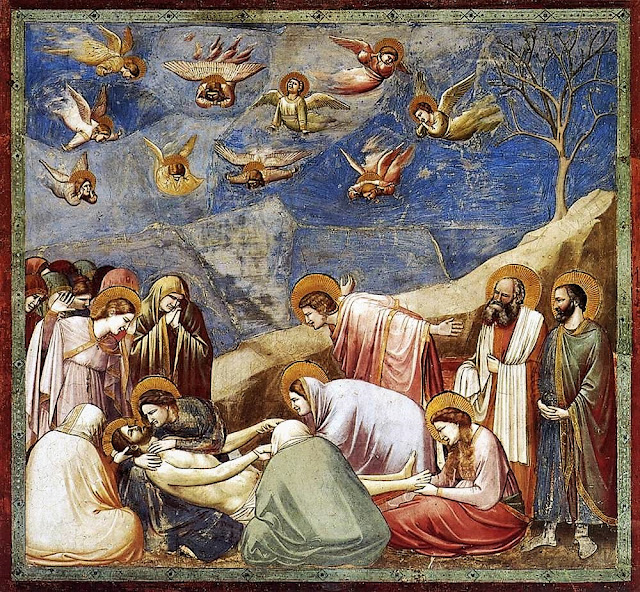 The composition of the painting is very sophisticated, while the overall effect is one of quiet contemplation. There are three interlocking triangles that create the composition. A great diagonal stone parapet or ridge creates the first, descending from right to left, reversing the normal “read” from left to right. The positions of Joseph and Nicodemus reinforce the wide edge of this triangle, while John, with his outspread arms, repeats the triangular motif. The second triangle descends from the group of women at the left down to the seated figure of Mary Magdalen. The final triangle is formed by the group around the prone figure of Jesus. It reaches its peak in the head of the woman seen in profile.


Against this complex composition the drama is played out by gesture and gaze. Although we are aware of the three triangles, it is the faces that capture our attention, especially the faces of the dead Christ and of His Mother. All the other characters gaze intently at them, with the exception of Mary Magdalen, who gazes down at the feet of Christ. Their gaze guides us and through them we become part of the story too. We are here moving into the image stream that will lead to multiple great works of art and ultimately to that most famous of all, Michelangelo’s “Pietà”.


Above the quietly grieving humans, the angels show their grief in a multitude of ways: with tears, exclamations, perhaps even screams.

While the mood of the lower part of the painting is calm and quiet, the upper portion is very restless, with the angels posed in diverse attitudes of grief.

Even the bare tree branches appear agitated. The natural world too reacts to the Crucifixion.