Thoughts on a Royal Wedding

OK.  It's a bit off topic for me, but obviously a lot of people are interested in this.   And, being that my parents were born as subjects of the British crown, albeit unwillingly, under Queen Victoria (my father) and King Edward VII (my mother), it is of some passing interest to me too.  There was much to appreciate in the day:
1.  The celebration of family, not so easily come by these days, even if one of the families involved has not had the best of track records in this or any other century.  I greatly appreciated the sermon by the Anglican Bishop of London.  You can read it here.
2. The connections with the past.  After all, a continuous, if sometimes convoluted, descent from Alfred the Great is nothing to be sneezed at.  Most of us are lucky if we can trace their ancestors back a couple of hundred years or so.  I can get to the last decades of the 18th century, but not beyond.

3.  The music.  The entrance piece "I Was Glad" by Parry is one of my all-time favorite anthems.  Indeed, it is the piece I hoped to have for my own entrance, had I been fortunate enough to marry .  I've been lucky enough to get to sing it twice. It is one of the greatest of those grand Anglican church pieces that the English choral tradion has produced.  The rest of the music was nice too.  I've always thought it is a pity that "Jerusalem" is so specifically English, as it has wonderful imagery.  I especially liked the "Ubi Caritas" by Paul Mealor.  The Westminster Abbey and Chapel Royal boys and men sounded great.
4.  The dress.  Actually, I'm more a shoe person myself and was trying very hard to catch a glimpse of the new Duchess of Cambridge's shoes.  But aside from a brief glimpse of the front of one I couldn't really see them.  The dress was OK enough, though a little too austere for my taste.  But then, I never really got over Diana's dress.  THAT was a dress!  A funny thing is that just yesterday I was viewing a retrospective video of Alexander McQueen's work that is online (link) at the Metropolitan Museum website.  A McQueen retrospective is opening at the Met's Costume Institute next week.  He is not a designer I've ever followed, although I've seen some of his work previously at the Met (as part of an earlier show) and in the windows of his shop in the Meatpacking District downtown.  Mostly they have seemed to me to be extreme, even weird, statements.  However, the video revealed that he (or his assistants working under his name) have been capable of producing pretty clothes.  Duchess Katherine's dress was certainly pretty.  So, I'm a bit more interested in seeing the Met's show.
5.  The place.  Westminster Abbey is, of course, a magnificent building.  But it's only partially English.  Although founded as a Benedictine abbey under the last Anglo-Saxon king, Edward the Confessor, the current building was built not only by English but also by French masons brought over by King Henry III.  It was added to over the centuries by subsequent kings, up till the time of the Reformation.  Finally, following a building hiatus caused by the upheavals associated with: the Reformation (1533-ca. 1600), the Civil War (1641-1649), the Commonwealth (1649-1661), the Restoration (1551-1689) and the Glorious Revolution (1689), the finishing touch of the west towers was completed under George II in 1745 by Nicholas Hawksmoor.  Consequently, as for so much of England's ecclesiastical patrimony, it is a Catholic building adapted to Protestant use. 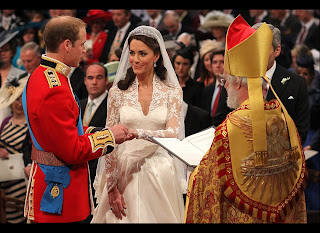 I do wish their Royal Highnesses every good wish and God's blessings on their marriage.
Posted by Margaret Duffy at 11:37 PM