So, today was the first day in the city for my new neighbor, Pope Francis.  And boy, oh boy is he being protected!

I can't say that I have yet seen video of the events of the day here in the Big Apple.  His arrival coincided with my departure from my apartment and I have only just returned home from two events (more about them later).

When I left my apartment I stepped off the elevator and out the door to find the entire block filled with parked police vehicles.

They were parked mostly on the sidewalk, perpendicular to the street, so that they could make a quick exit, but leaving little room for pedestrians. That was pretty amazing. 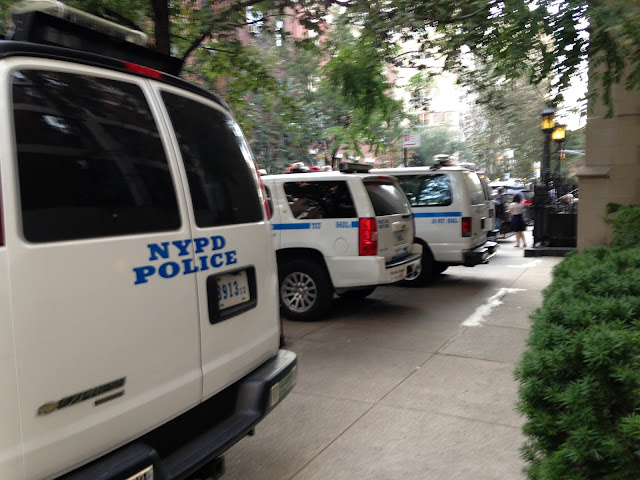 My way led to Madison Avenue which was still open to traffic, though with lots of barricades.

Returning home I found that the street has been blocked at both ends by heavy Sanitation trucks.

Before entering my block I strolled down Park Avenue to 72nd Street and found that street even more heavily blockaded and very brightly lit.  In addition, the sidewalks were completely closed by barricades.

There was no possibility of a group forming across from the residence to serenade the Pope as happened with Pope Benedict in 2008.  In that famous New York phrase, fu-ged-a-bow-dit!

Returning to my own block I walked to the Madison Avenue end and found the avenue as completely off limits as 72nd Street was.  I wonder if the stores, galleries and restaurant on that and the blocks on the other side of 72nd Street will even bother to open tomorrow.  There seems little point.

And, on a lighter note, the bobble head Pope Francis has been moved to a seat on one of the stools in the antique store window.

My activities of the evening were all within walking distance.  The first was a lecture on Iconoclasm in Spain during the Spanish Civil War.  An astonishing number of religious works of art were destroyed, and I do mean destroyed, by the Republicans, according to the scholar presenting the talk.  They included an early Michelangelo statue, a Crucifixion by Francisco de Mena and numerous paintings by El Greco, Zurbaran and others.  There was some destruction by the Fascists, as well, though this was apparently more in the nature of collateral damage than deliberate destruction such as occurred on the other side.  It is interesting that in all periods and places in which iconoclasm occurs it is religious images and especially the faces of the images that are most vehemently attacked.  I may make further comments on this in a subsequent post.

After the lecture I went to a concert.  This was a performance of Karl Jenkins' "Mass for Peace, the Armed Man".  The name derives from the Renaissance motet, "L'Homme Armé", which forms the base for the first piece in the current work.  Tonight's performance, by the Amor Artis Chorus and the New York Camerata Orchestra was certainly powerful, blisteringly so in fact.  It was accompanied by the projection of video, obviously put together by persons working with the composer, using images of war and peace from nearly ever period of history from the Roman Empire to today.   I had some reservations about some of the images, partly because they were definitely British in tone, partly because they seemed distinctly Euro-centric and partly because they used footage of the attack on the World Trade Center, including the moment of attack on the south tower and of that tower's fall.  I was concerned that there could be people in the audience who may have lost family or friends in that event, especially as its appearance was unexpected.  Still, the concert definitely had something important to say about war and peace, if only that peace is generally better than war.  However, we do need to remember that there may at times be things worth fighting for, we just need to be sure that we know the difference.
Posted by Margaret Duffy at 11:30 PM