The Persistence of the Middle Ages

Over this past month of February 2013 I have been struck by the ways in which events and persons from the Middle Ages have inserted themselves into our 21st century consciousness.


The month began, as previously noted on this blog, with the dedication on February 2nd of nine new bells for the Cathedral of Notre Dame. The new bells are replacements for the original, medieval, bells, cast in the late 14th century and destroyed during the French Revolution, and bring the ring of bells in the towers of Notre Dame back to their original, intended complement and function.

Two days later, on February 4th, the University of Leicester in Great Britain announced the identification of a skeleton, recently unearthed from underneath the municipal parking lot that replaced what was once the church of the Greyfriars, as the remains of King Richard III, who was killed at the Battle of Bosworth in 1485. The bones indicated that the person had suffered in life from a serious case of scoliosis (curvature of the spine) and had died from a number of wounds.

Various marks also suggested that the body had suffered a number of “humiliation” injuries after death. All of these findings pointed at the defeated king, who is the evil protagonist of Shakespeare’s play of the same name. The degree of scoliosis certainly verifies the historical reports that Richard had one shoulder higher than the other and suggests that he must have lived a life of almost constant pain as an adult. Comparison of DNA extracted from the bones with a sample collected from a Plantagenet descendent appears to match, further confirming the identification.

A portrait bust, built by a forensic sculptor on the basis of the bones, revealed a man whose face is consistent with, though younger and a bit better looking than the face we have come to know from the surviving copies of lost contemporary portraits. However, given that the art of portraiture was not yet well advanced at the time of Richard’s death this isn’t too surprising. Whether the man with this face could have been the ruthless child killer of Shakespeare’s play is an open question. Some will say that it is impossible. I’m not so sure. But that is not a question for this blog.

The identification of the body has also led to a bit of a wrangle regarding the reburial. Both Leicester and York have vied for the “honor”. Leicester proposing itself as the original burial place, York proposing that it was the place of his original intention. Leicester has won the battle. Then there has been a controversy about what rites should be used for the reburial. Richard lived and died a Catholic Christian. The Reformation of Henry VIII was still two monarchs and 50 years in the future in 1485. Leicester Cathedral is currently a church of the Church of England. It appears that the University will handle the burial at Leicester after an “interfaith” service, a most un-medieval idea! 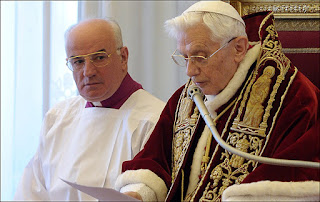 Finally, only one week later, came Pope Benedict’s announcement that he is renouncing the Petrine Office, effective tomorrow. Like almost everyone else in the world I was stunned (or in that great, descriptive, British slang phrase “I was gob smacked!”). Knowing, as I do, a good deal about the medieval world I knew, of course, in the background, that this has happened before, but not since the end of the Middle Ages! So, here it was again, the intrusion of the Middle Ages into the 21st century world! Much has changed in the world since the last two renunciations, but much remains the same.

I thought it might be interesting to note that Pope St. Celestine V (who resigned in 1294 for reasons of age and unsuitability) and Pope Gregory XII (who resigned in 1415 in order to resolve the impasse of the Great Schism) both lived for two years following their renunciation of the Chair of Peter. However, since the Renaissance a papal abdication has become unimaginable, until this extremely bold move.

There is, at this junction, a sense of sadness, of sympathy, of gratitude and of love brought to one’s mind and heart by this action of the Holy Father. I am awed by his humility and also by his profoundly clear-eyed rationality, characteristics that have been so evident during his pontificate. I will miss him more than I can say. I will miss his straightforward way of cutting to the heart of the message in his writing and speaking. And, as an art historian, I appreciate his frequent referencs to various works of art, demonstrating a very good visual memory. As a celebrant of dignified liturgies he has shown the way forward for many. And, as a musician he has surely had a profound influence on the formerly embarrassing quality of the music at St. Peter’s.

All these medieval intrusions in our modern world remind us that the past is never truly dead and gone. At any time it may come up and smack us in the face.